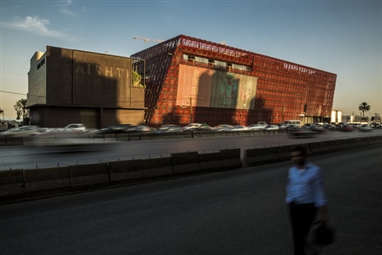 All that star power has helped confirm Beirut's place on the international art and fashion map. But Aishti is just one of several art spaces that have opened recently or are planned here, enlivening an already rich cultural ecosystem. This month, theSursock Museum, with a collection of Lebanese art in a historic mansion, reopened with fanfare after an eight-year renovation, while a museum of the City of Beirut is under construction, and a new contemporary art space and an archaeological museum are being planned, among other projects.

The creative ferment is happening even as unrest in the region and domestic political instability have ground the economy and tourism to a near halt and threaten to embroil Lebanon in new conflicts. Beirut is also a city where luxury towers are redrawing the skyline while the arrival in recent years of an estimated 1.5 million refugees from neighboring Syria has strained the infrastructure of a country of 4 million. A crisis over garbage collection recently plagued the city, but seems to have subsided.

It is a moment of contradictions, said Rima Mokaiesh, the director of the Arab Image Foundation, a repository of 600,000 images from the Arab world and diaspora and a conservation center founded in 1997, seven years after Lebanon's civil war. "We have all these great cultural initiatives happening, and then we have millions of Syrian refugees who we're not able to handle, and we have a crisis of corruption and lack of access to basic, basic services."

How the city can contain such contradictions is a testament to its vivacity, history of surviving sectarian conflicts and long-established art scene. The cultural developments also result from local wealth and a wealthy diaspora - call it a remittance economy of the 1 percent - and a weak central government leaving a gap often filled by individual initiatives.

In this chaotic context, Tony Salamé, the 48-year-old founder of Aishti, Lebanon's answer to Saks Fifth Avenue, decided to build a mall with a large wing (about 13,100 square feet) to show off the collection of more than 2,000 pieces he and his wife, Elham, have acquired in the past 15 years, including works by Gerhard Richter, Glenn Ligon, Lucio Fontana, Carol Bove, Christopher Wool and many others.

"It's the worst timing ever," Mr. Salamé admitted one afternoon last week, as workers scrambled to complete construction in the same rooms where expensive artworks were being installed, a scene that would have induced heart attacks in conservators. "We haven't had a president for two years. The government doesn't work, the trash is everywhere, nothing is working, we don't have electricity and have to have private generators," he said.

Still, he had wanted to move forward. "I think the best thing with a project, you forget about the uncertainty in the place, you keep on going," he said. The building went up remarkably quickly, at a cost of around $100 million, Mr. Salamé said, just three years after Mr. Adjaye, one of the world's most sought-after architects, first sketched his design and two years after ground was broken.

The inaugural show of 100 pieces is called "New Skin," after a work by the artist Alice Channer. Mr. Gioni said the concept was "to look at abstraction today and to trace back the idea of information as both a theme and a technique."

The space will be free to the public in a city with few venues that routinely show international contemporary art. Many people here see Aishti and the other initiatives as a kind of defiance against a troubling political situation, but both tourism and spending on luxury goods has declined dramatically, and it remains to be seen how many people will come.

Others dismiss the impulse to showcase art and architects from abroad. "We were colonized for a long time, and unfortunately we still have this inferiority complex, that what's from abroad is better than what we have," said Nadine Begdache, who shows Lebanese artists at the Galerie Janine Rubeiz. "It's not true."

While Aishti is meant to showcase one private collection, other museums seek to reconnect Beirut to its past. They include the Sursock Museum, which first opened in 1961 in a 1912 mansion donated to the city by Nicolas Sursock, who came from a prosperous family and began collecting Lebanese art in the 1920s. "We're not in the gulf," said Zeina Arida, the director of the museum. "We're not starting from scratch."

The museum reopened on Oct. 8 and is a rare example of a privately run museum funded by the city. After years in which most art initiatives here were private, Ms. Arida said, she hoped it would set a new standard. "Maybe the museum is the organization that will enable us to build a model of a public institution that is functional, that is efficient, where you see where the money goes," she said.

The Sursock reopened with a temporary exhibition of images of Beirut from 1800 to 1960, selections from a collection of historical photographic portraits, and a show by contemporary artists that explores Beirut's changing landscape, a subject that has captivated artists and activists since the city's war-shattered downtown has been reshaped by new construction.

Preserving a slice of the city's past is the idea behind Beit Beirut, a museum of the city of Beirut, which is taking form in a structure built as a comfortable apartment building in the 1920s but that fell on the Green Line, which divided the largely Muslim west Beirut from the largely Christian east. It was used as a bunker by snipers for the duration of the civil war, from 1975 to 1990.

The idea was "to create a museum of memory - not of the war but of the city," said Mona Hallak, an architect who helped save the building from demolition in the early 2000s and is involved in the curatorial program, which is still under discussion.

Funded by the City of Beirut, the project has been delayed by local politics. It is expected to open next year, said Youssef Haidar, the architect for the renovation, as he toured the dusty site last week, pointing out walls pockmarked by shelling.

A nonprofit organization, the Association for the Promotion and Exhibition of the Arts in Lebanon, or Apeal, gives grants to artists and is fund-raising to build a museum for art from Lebanon and the Arab world on land granted by a university here.

Plans are in the works for an archaeological museum to be designed by Renzo Piano, a collaboration between the Culture Ministry and Solidere, the construction company driving much of downtown Beirut's redevelopment. And the Fondation Saradar, from the bank of the same name, has brought on respected curators to assemble an art collection.

Last week, "Heartland: Territoire d'Affects," a show of Lebanese art, opened at theBeirut Exhibition Center, and Marfa, a private gallery, opened with a show of photographs of dust by Vartan Avakian, collected from the building housing Beit Beirut.

Beirut's National Museum, near the Green Line and also used by snipers during the civil war, plans to expand its exhibition space. For now it is an oasis of calm. It showcases Greek and Roman antiquities of the kind being destroyed - or looted for sale - by the Islamic State, or ISIS, in places like Palmyra, Syria, some 160 miles away.[By RACHEL DONADIO]