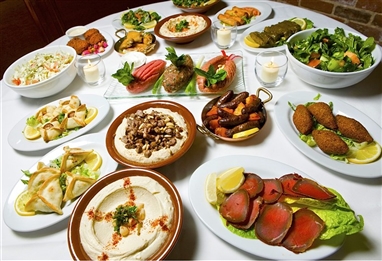 Top 5 things we love about Lebanon:

Well the food, it can just speak for itself. Few things can compare to the delicious assortments of dishes served as the Lebanese traditional mezze. The hummus, the tabbouleh, and the kibbeh are not considered foreign words anymore; they are approved and loved by people around the globe. For the newbies in the world of Mediterranean food, here is some advice: don't get too stuffed from the mezze because the food only keeps getting better; the mashewe (grilled meats) and then the fruit table served with a variety of deserts is to die for!

One of the things that Lebanese people know how to do best is to party and we sure are proud of our Nightlife. Beirut has always been and continues to be the Middle East's Party Capital. Whether it's a Monday night or a Thursday night, the streets of Beirut are always filled with people enjoying every second of their free time. It doesn't matter if we have work the next day, happiness is the highest level of success ;)

Lebanon is a country that has 4 seasons. You are capable of going to the beach and the mountains in the same day. Especially during spring, some of the Lebanese mountains are still covered in snow, while the temperatures are rising. Why not spend the morning skiing and the early afternoon swimming.

This is only possible because of the short distances! One of the best things of living in a relatively small country is the ability to get to places quickly, nothing is far :)

One thing we take for granted is the fact that there is always something going on in Lebanon; this makes life a lot more interesting. Going to social events often, meeting new people, and enjoying great food is what life is about.

Most of the Lebanese abroad come to Lebanon (to party, because they love and care for Lebanon, to feel at home...) during their holidays even though they can go anywhere else. I am pretty sure that almost every family living in Lebanon has at least one of its members abroad. It's so nice to see the country crowded with families that are reunited during the summer and in special occasions such as Christmas and Eid.

Even if you are not in Lebanon, you can directly identify a Lebanese and bond instantly over family, common friends or simply because most of the time he would turn out to be someone you know :P