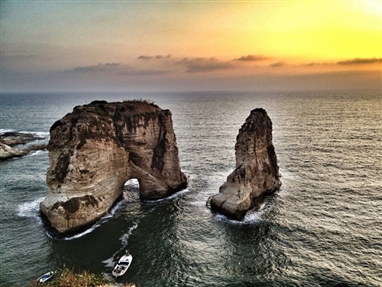 Are you visiting Beirut for the first time and want to know where to go? Or are you living as a tourist in your own country? No matter your reason or excuse, here are some "must see" locations and cities located in the capital of Lebanon, Beirut. Especially if you are a Lebanese, don't waste time, get up and start discovering your own beautiful country step by step.

Traditions, architecture, and cultural places found in the capital - Beirut:

The Beirut National Museum (Mathaf Beirut Al Watani) is the principal museum of Archeology in Lebanon. The museum was officially opened in 1942 and has collections of about 100,000 objects.

The story of the National Museum started in 1919 with a small group of ancient artifacts, which had been collected by Raymond Weill, a French officer stationed in Lebanon.

Today the national museum building is made up of three floors, it closes on Mondays and on special occasions and operates from 9:00-17:00.

The Sursock Museum officially known as the Nicolas Ibrahim Sursock Museum is located in Sursock street, Achrafieh and it is a modern and contemporary art museum.

More than a hundred exhibitions have been held at the museum displays including works of Lebanese and international artists.

Rawcheh rocks
Experience the Beirut street life along the Corniche at anytime, whether it is during the day or at night; people are exercising, taking romantic walks, sharing a coffee, or selling food bites along the corniche.

During your walk don't forget to check out the Manara Lighthouse and enjoy the view of the sea.

No matter what day of the week it is, these streets are always filled with people having a drink, grabbing a bite, and/or partying with friends.

Don't miss checking out these cities and neighborhoods in Beirut:

Downtown Beirut houses some of the finest boutiques, galleries, art, and historical monuments. The inner area around Nejmeh Square, the central square area with the famous clock built by the Ottomans, is a pedestrian only area filled with restaurants, monuments, and cultural aspects.

According to the lonely planet magazine, what Beirut is depends entirely on where you are. If you're gazing at the beautifully reconstructed colonial relics and mosques of central Beirut's Downtown, the city is a triumph of rejuvenation over disaster. If you're in the young, vibrant neighbourhoods of Gemmayzeh or Achrafiye, Beirut is about living for the moment: partying, eating and drinking as if there's no tomorrow. If you're standing in the shadow of buildings still peppered with bullet holes, or walking the Green Line with an elderly resident, it's a city of bitter memories and a dark past. If you're with Beirut's Armenians, Beirut is about salvation.

Hamra Street was referred to as Beirut's "Champs Elysées" as it was frequented by tourists all year round. It hosts a good number of hotels, furnished apartments, and coffee shops that cater to visitors and students from close by American University of Beirut and Lebanese American University. During the last few years, it has been revitalized, with many new upscale bars, cafes, restaurants, and shops opening, and is becoming a popular district for shopping, nightlife, and cuisine once again.

Achrafieh is known to be the "chic quartier".  Ashrafieh, (also written Achrafieh) is one of Beirut's oldest and most charming districts and is considered an important tourist outlet in Beirut where a great number of restaurants, coffee shops and nightclubs are located. This, in addition to its important commercial venue, its luxurious apartment buildings combined with renovated traditional houses, makes of Ashrafieh an ideal place for shopping and touring within the city.

Gemmayzeh is a neighborhood in Ashrafieh; it is full of narrow streets and historic buildings from the French era. This street is known for its bars, pubs, cafes, restaurants, and lounges.

Mar Mikhael is considered a new hotspot for Beirut party-goers, it is also sometimes called "the new Gemmayzeh" but is traditionally known as a more industrial hub for hardware shops, car parts and furniture. It begins at the end of Gemmayzeh Street near and runs down to Nahr Street, which separates it from the Bourj Hammoud neighborhood. It is filled with bars, restaurants, art galleries and more.