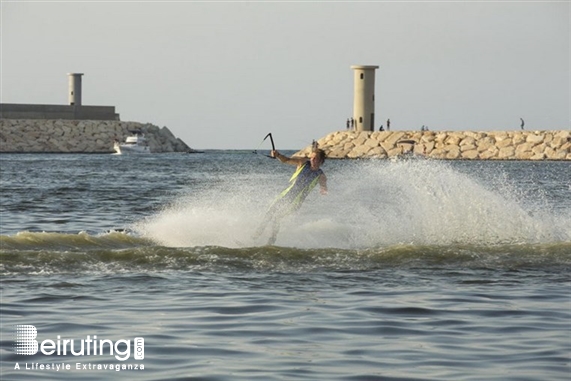 The Lebanon Water Festival held its closing event, a night and a day water ski show, in Saida on September 19 and 20. The show was the first of this kind to be held in Saida in over a decade.

"The show was highly professional, with calm water, thanks to Saida's new port, which is very adequate for water sports. We have asked the municipality of Saida to upkeep it in order to hold more events in the future. We are very happy that Minister of Tourism took part in the show to support our initiative", says Simon Khoury, co-founder of the Lebanon Water Festival.

On Sunday, the Minister of Tourism Michel Pharaon opened the show by carrying the Lebanese flags on water skis during the national anthem. Lebanese slalom champion Karim Chamoun was also part of the night show on Saturday.

"This festival is very important because it is related to tourism, sport and environment. It also gives a positive image of Lebanon while highlighting serious issues like environment. I would like to thank Simon Khoury for everything he is doing for Lebanon and for having taught me how to ski!" Michel Pharaon, Minister of Tourism, said.

"A show like this one means a lot to Saida and Lebanon. The country is in a big crisis now so it's good to have something different and to allow people to see something pleasant and to think about sports. It's the first time we see water skiers in Saida", says Mohamad Saudi, President of the municipality of Saida.

The Cypress Gardens Water Ski team was very happy to be in Saida, where they had a chance to experience Lebanon's culture and history. "It is the fourth time I come to Lebanon for the water ski show, but it is my first time in Saida. It is always a pleasure to visit this beautiful country. We made great friends in Lebanon over the years and are always excited to come back", says Jeremy Armstrong, water skier and boat driver.

The water ski shows were also an occasion to raise awareness about the importance of the preservation and depollution of Saida's coastline and sea. In the past years, the municipality has put a lot of efforts into depolluting the city's coastline and building a sea wall to prevent waste from discharging into the sea.

Overall the Lebanon Water Festival has gathered 30 000 spectators on site since its beginning on July 26th, a 60% increase versus 2014. It now has about 10,000 active followers on Facebook and Instagram cumulated, and reached 30 million Europeans with the Euronews package.

Since 2012, the Lebanon Water Festival launched as a fully institutionalized NGO, bringing the water sport community together across the country while allowing it to grow by 30% every year. The importance of this community is what they share all together; sport values, such as going beyond oneself, learning that participating is more important than winning, respect of others, dedication, practice and therefore a healthy attitude towards mind and body, and their love for nature. All water sports require one important value: respect for nature and the environment within which sports can be practiced. It also requires respect for the sea, beaches, underwater species, and other people from all the walks of life, bringing down social barriers. In addition, the Lebanon Water Festival is pushing athletes to visit their own country from North to South and discover the beauties that lay before them.

Public Photos
The Dabkeh Must Go On