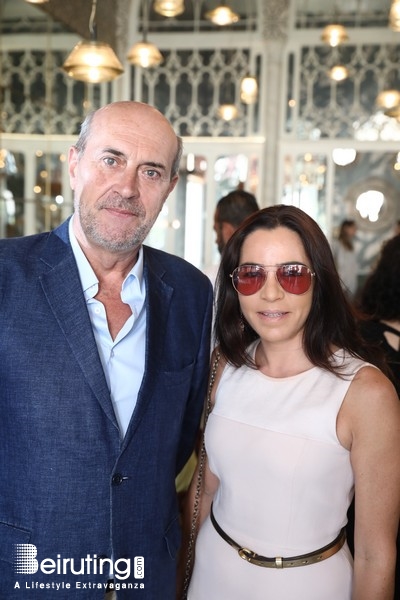 RAISE THE BAR AND GROW

For its third edition, Beirut Design Fair reaffirms its dedication to showcasing exclusive collectible and limited-edition contemporary and modern furniture and Design objects, and expands to welcome Design jewelry. The Fair's other significant development, in response to visitors' wishes, is its greater proximity with Beirut Art Fair, the two events enriching their souls in the same vast space.

Our commitment remains to relentlessly raise the bar of Design, thanks to our exhibitors and our valuable Selection Committee, whose exacting standards reverberate throughout the fair's booths and SpotOn.

BDF is devoted to providing visitors an experience overflowing with surprises and emotion, unsuspected encounters and discoveries. Spectacular installations are in our DNA, which is why we entrusted architect Rawad Rizk to develop the scenography of your yearly rendezvous with design. His two symbolic installations simultaneously propose a benevolent confrontation with Beirut's architectural chaos, and serve as cutting-edge displays to showcase exceptional design creations.

Beirut Design Fair (BDF) is dedicated to collectible and limited edition contemporary and modern furniture and design objects. This year, the fair presents pieces by leading international designers and galleries from across the world (Europe, Middle East), with about 50 exhibitors from over 6 countries.

By increasing the level of quality every year, continuously expanding and enriching its program, BDF seeks to satisfy the demand for a high-end design fair in Middle-East, to broaden awareness of modern and contemporary design, fuel the market for collectible design, and provide an exciting yet accessible destination for collectors and experts alike.

Commended by a growing audience, the 2018 edition of BDF concluded on September 2018 at Seaside Arena, with Lebanon reflecting the extent of its confidence in Design, and Beirut asserting its position as the First regional marketplace in this field. As a Mediterranean and Middle Eastern Design hub, the Lebanese capital enabled several international and regional Design stars to shine for 5 days.

The fair's scenography set-up this year by architect Rawad Rizk confronts us with the architectural chaos of Beirut and will provoke emotions through symbolic and spectacular installations that showcase exceptional design creations!. The level of this 3rd edition of BDF will be perceived as higher, as per the objectives of the organizers and the Selection Committee; It broughts together 50 exhibitors from the region and from Europe (France, Belgium...) presenting the creations of more than 100 designers.

BDF offers an exceptional, innovative program that confirms Beirut's role as one of today's most vibrant centers of contemporary creation, while positioning Lebanon in its rightful place: as the Design Platform of the Middle East!

Beirut Design Fair 2019 will be held in Beirut: 19 - 22 September 2019 (VIP Opening: 18 September.), in parallel and in partnership with Beirut Art Fair, which celebrates its 10th Anniversary.

The policy that has been Beirut Design Fair's since the beginning, consisting of raising the level of quality in the Fair, year after year, pays dividends: the level of the 2nd edition of BDF (2018) has been perceived as significantly higher, as per the objectives of the Selection Committee and the organizers.

This ambition is underscored by the importance of the Selection Committee, which brings together in 2019 three major experts playing a leading role on the international design scene. They come from Lebanon, USA, France, and hold mankind in the core of their endeavours. We are pleased and honored that Rebecca Anne Proctor, Nadia Jabri and François Leblanc Di Cicilia have agreed to contribute so much to the quality of this event, and we confidently entrust them with the keys to your «rendez-vous».

The selection committee for Beirut Design Fair reflects the event's position as a platform for fostering encounters and showcasing talent: one where rigor meets generosity, where diversity is celebrated in a cosmopolitan atmosphere, and where the promotion of creativity is rooted in an economic and cultural context.

Beirut Design Fair continues to take the utmost care in the structure of its Selection Committee. Seeking quality first and foremost, the role of the Selection Committee is to allow the fair to find a balance between national and international exhibitors, between established and emerging or independent designers, between modern and contemporary creations, worldwide or Lebanese.

The confluence of these recognized professionals offers multicultural expertise on a variety of topics centered around the pursuit of meaning, relevance and beauty.

This interaction is essential to maintain the primary orientation of Beirut Design Fair: to become the design showcase of the East Mediterranean, where all collaborations are made possible beyond frontiers.

Rebecca Anne Proctor is the Editor-in-Chief of Harper's Bazaar Art and Harper's Bazaar Interiors, a role she has held since 2015. Previously, Rebecca collaborated on a dozen media and publications in the Middle East region while contributing to numerous catalogs on the art and culture of the region.

In a previous life, after obtaining her M. Litt from Christie's London in Modern and Contemporary Art History, Rebecca worked at Gagosian Gallery before moving to Paris to pursue a double MA in Middle Eastern Studies and Conflict Resolution from the American University of Paris and a Master's in «Sociologie des Conflits» from the L'Institut Catholique. Two dissertations later, one developed in Baalbek district (Lebanon), she moved to Abu Dhabi in 2009 where she worked at Barakat Gallery and then at Ayyam Gallery in 2011 as an art consultant.

Hungry for new horizons and encounters, Rebecca is an extensive traveler. Her mobility has led her to roam the Middle East, Turkey and Persia, Central and South Africa, Maghreb, South Asia, India ...

Rebecca is and has been regularly asked for several years to animate panels, debates and round tables (Arts, Culture, Media ...) in Europe and the Middle East, in artistic events or on TV, in front of the most varied audiences.

Nadia Jabri is the founder of Letternoon, an international platform specializing in curated Middle Eastern contemporary art and design through an online shop, exhibitions and limited edition production based in New York City.

Trained in international affairs and human rights at Columbia University's School of International and Public Affairs, Nadia worked in various international advocacy roles in legal and public affairs. Inspired by her cultural experiences, she saw an opportunity to pursue her commitment to social progress and well-being with a lifelong passion for design and innovation.  She created Letternoon to provide first time access to emerging design and content with a mission to change misperceptions about the region.  It is her hope that retail diplomacy will inspire greatly needed creative connections and collaborations.

Director of the Gallery S. Bensimon in Paris for ten years, François Leblanc Di Cicilia, known as a real talent scout, also personally advises designer's studio and brands for their creative and commercial development. He founds in love with design and craft during his 4 years' mission for the Galeries Lafayette Group into the Decorative Art Museum in Paris.  His life's comitment  is to share know-how and creativity to build bridges between people.

IF CHAOS WERE A SHOWCASE ?

Safeguarding the Lebanese architectural heritage, and the current urban situation of the city of Beirut, left today without a master plan, without a vision, adrift for some, are issues at the heart of the research proposed for Beirut Design Fair.

Beirut continues to renew itself, to invent itself over and over, to rebuild everywhere and permanently, sometimes in disregard of the memory. Beirut is regularly the subject of disputes between archaeologists and real estate developers, between defenders of the inheritance and supporters of the clean slate. History and current circumstances make Beirut a city full of beautiful surprises, as well as encounters with disasters, where happy accidents await the passer-by at the corner of a street, at the end of a courtyard.

The scenography of Beirut Design Fair is a tribute to the architecture of Beirut. It is provocative and benevolent at the same time, an attempt to confront the public to the complexity of the architectural realities of the city, an invitation to reflect on the city which the people of Beirut want and need. Above all, this scenography aims to constitute a showcase for exceptional, modern and contemporary local, regional and international design creations presented by the exhibitors of Beirut Design Fair.

Beirut is a world-city as much as a city-history and today enjoys the status of the most important design hub in the Middle East, with open doors to the west, and a showcase for the region. The two spectacular and symbolic structures erected in Beirut Design Fair aim to create a singular and perhaps moving experience, and invite to a journey in space and time. The first pavilion pays tribute to the broken arch and arcades typical of traditional Lebanese houses, the second to modernism, through the clean forms characteristic of the 60s, the two forms reduced to skeletons of structures that confront and complement each other. just like the elements of the Beirut architectural landscape. If today's design succeeds in embodying the objects of our present, it is thanks to its deep roots in the experience and the traditions, fruit of the exchanges, the brewing and the successions of peoples and civilizations, at the same time. At the Image of Beirut, host city of the Beirut Design Fair.

RR | architects is a young architecture studio who put forward an innovative, modern and sustainable approach. From master-planning and architecture to interior design and product design, Marrying all fields for the sake of the client's needs - RR | architects, Lebanon, Beirut,  +961 76 080 111

The 3rd edition of BDF has about fifty exhibitors, mostly Lebanese or from the region. This year, it is worth noting the arrival in the event of Jewelry Design and, in contemporary design, a new and significant presence of Belgium!